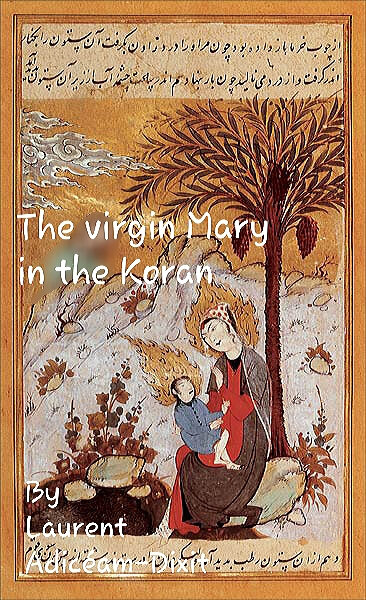 AND ITS POINTS IN AGREEMENT WITH THE BIBLE

At the beginning of Mary's theme in the Koranic texts I wish to touch on, I would like to emphasize that the Koran and the Bible come from the same source that echoes each other. In it: the oneness of God: a God of Christians and Muslims, Jesus: more Messiah among Christians and prophet among Muslims, and regarding this, let me recall you that John Paul II proclaims in Kaduna, Nigeria in 1982 an inter-religious bond:"...So we can call ourselves in the true sense of the words: brothers and sisters in faith in the one God... Thanks to the faith we have in God, Christianity and Islam have much in common. » And last but not least, the echo of Mary, who in the Koran is called Maryam, daughter of Imran and thus sister of Moses and Aaron (reference to her ancestors / her supposed filiation even if there is more than a good millennium between them), and point out that on her dubious motherhood without a father, the Israelis slander her: "Sister of Harun, your father was not an evil man and your mother was not a prostitute. "(19:28) And of course, the other resonance, the mother of Jesus.

But who is Mary in the Koran?

Mary (Maryam, in Arabic) is quoted 34 times in the Qur'an, the founding text of Islam even praises Sura 19 in the 98 verses called "Mary's Sura" as indicated in the university course: birth of Jesus (Sura 19:16-35). The Koranic writings say that her mother, Imran's wife, consecrated her to God from birth (3:35-36), that Zechariah took care of her education "in the sanctuary" (3:37), that she received " The good news" from a "word" from God (3:45), that she therefore became pregnant without the help of a man "under the action of the spirit of God" (The Angel Gabriel) who presents himself to her as a perfect man (19:17, 20-21), she gives birth to her son in the desert at the foot of a palm tree that gives her fresh dates and thirst-quenching water (19:25-26), she presents her baby "to her family" responding with a "fast of silence" to their accusations of prostitution (19:26-28). It should be noted that at first, Maryam is confused and disconcerted by these words.

She said, incredulous: "Lord! How could I have a child when no man has touched me?" He said, "That's how it will be. God creates what He wants. When He decrees something, He only says "Be! "and she is immediately. "(Sura 3:47) When she feels the pain of childbirth, she clings to the trunk of the date tree and, under the effect of suffering, shouts out: "Oh, I wish I had died before this and was in oblivion, forgotten." (19:23) Delivered, Maryam had to face her family, but as God had commanded her, she did not speak. She points her finger at her baby and so it is that as soon as he is born, Jesus, prophet of God, performs his first miracle by saying: "I am truly the servant of God.  He gave me the Book and made me a prophet; He made me a source of blessing wherever I am, and He enjoined me to pray and zakat as long as I live. He made me devoted to my mother and He made me neither insolent nor miserable.  May peace be upon me on the day I was born, the day I die and the day I am raised alive! » ( 19:30-33). It should be noted that zakat is the act of giving money to the poorest for Muslims (charity is one of the five pillars ordered by the Koran and that believers must accomplish.) It should also be noted that Islam rejects the Christian notion that Jesus is part of a trinity, as well as the idea that Jesus and Mary should be worshipped in any way.  The Koran categorically states that there is only one God and that no one deserves to be worshipped except Him (Cf. my 1st duty). In summary, for Muslims Maryam is considered a sign (aya) (23, 50-51) and a model of faith in God (mathal) (66, 10-12) for humanity. The Koran mentions that Maryam was specially chosen by God and made pure (3:42), that she is a holy woman (siddiqa) (5:75), instinctive recourse to God (19:18), abandonment to his will (3:37; 19:21), piety and contemplation (19:17), respectful silence (19:26), prayer (3:43),...

The concordant points of the Koranic texts on Mary in the Bible:

Although the stories about Mary in the Qur'an and the Bible share some common points, the idea that Mary was engaged or married is totally denigrated by Islam. Joseph, Mary's husband in the Bible, is not mentioned at all. For Muslims, who do not believe in original sin for every human being, Maryam did not need to be preserved. Maryam's pre-eminence in the Koran is summarized by a verse that recalls the greeting, the proclamation of the Angel Gabriel to Mary in Luke's Gospel. In the Koran, the angel Gabriel presents himself to her in the form of a man. As he was very close to her, she was afraid and invoked God's protection. The angel Gabriel then told her that he was not an ordinary man, but an angel sent by God to tell her that she was going to bear a child of great purity (19:16-19): "Mary, God has chosen you. He made you pure, and exalted you above all the women of the universe. » (3,42). In the Qur'an, Jesus has no natural father, and God is not (112:3 "God has never begotten, nor was he begotten" (cf. Sura 112:3 AL-Ikhlas: pure monotheism).

His mother's name is Maryam or Mary in Christianity. Thus, however, the Qur'an gives us a clue in the same direction, in Sura 3:45 - it is said: "O Mary, behold, Allah has spoken a word to you from Him: His name will be "The Messiah", "Issa", son of Mary." It should be noted that in both religions, Jesus is single and has no descendants. Maryam or Mary gives birth to Jesus in a miraculous way, cf. the gospels of Matthew and Luke.  "Mary" or "Maryam" is consecrated to God, welcomes the word of God, bears Issa or Jesus in its womb, consecrates it to Allah or to God without Him having asked Him to do so. Maryam or Mary has a descent under the protection of the Divine even though Jesus was crucified as Savior of the World and then risen and Issa raised and recalled to Allah in heaven (Cf. Jesus in the Quran). "Maryam" or "Mary", pure, servant of God, has no role as a prophetess but retains an honorary rank in religious texts and is held in high esteem by Muslim and Christian believers.

In the Koran, no other woman receives as much attention as Maryam, although all the prophets had a mother, except Adam. Despite patriarchal traditions, where men are elected, privileged, Maryam is a woman, a model of piety for having given birth to the chosen one at God's request.

Commentaires sur MARY, MOTHER OF JESUS IN THE KORAN